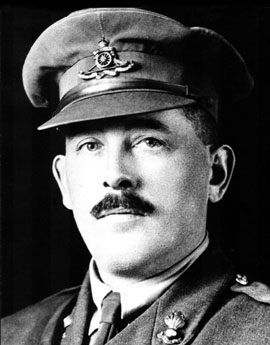 Charles Henry Ludovic Sharman was born in South Woodford, England, in December 1881.  He was educated at St Lawrence College and passed the first examination of the Incorporated Law Society.  He was drawn to the New World, and in particular, to the excitement of the Klondike Gold Rush.

He joined the North-West Mounted Police (NWMP) in 1898, serving with Colonel Sam Steele in the Klondike, gaining promotion to Sergeant.  His North-West Mounted Police service was interrupted in 1902, when he volunteered for duty in South Africa with the 5th Canadian Mounted Rifles.  He was granted leave and seconded to the Canadian Contingent.  He arrived too late to see action.

On 31 October 1903, Sergeant Sharman was discharged from the NWMP, having served his obligatory engagement.  Immediately following his discharge, he was employed as Secretary to the Commissioner.

Returning to Eastern Canada and a position with the Department of Agriculture, he was appointed a Provisional Lieutenant in the 2nd Battery, Canadian Field Artillery, in April 1906.  He completed his qualification training two years later, and in June 1908, was promoted, Captain.  In 1911, he represented the Canadian Artillery as part of the Canadian Contingent at the coronation of King George V.

Captain Sharman was appointed Adjutant of the 8th Field Brigade, in February 1912.  He served in this appointment until mid-April 1913 when he was promoted Major and given command of the 2nd Ottawa Battery.

At the outbreak of the First World War, Major Sharman was seconded to the Canadian Expeditionary Force and assigned command of the 1st Brigade’s 1st Battery.  He was wounded at Ypres, evacuated to England and subsequently placed on convalescent leave in Canada.

Promoted to Lieutenant-Colonel in July 1916, he returned to France to command the 4th Brigade, Canadian Field Artillery, the only artillery formation to accompany the 2nd Division in France.

In April 1917, Lieutenant-Colonel Sharman was appointed Chief Instructor, Canadian School of Gunnery at Whitley, England. From 1917 until June 1918, he served as Commandant Canadian Reserve Artillery at that same location.

On the creation of the 16th Brigade, a newly formed, all-volunteer formation raised for duty in Northern Russia, Lieutenant-Colonel Sharman was selected for command.

He became Commander Royal Artillery, Dvina Force.  They handled Canadian and Russian guns and a number of Royal Navy gunboats in a series of engagements against the vastly numerically superior Bolshevik forces.  His practical ability and determined nature were demonstrated, with the transport of three sorely-needed 60-pounders.  Transported overland by sled 120 miles from Murmansk to the front in only ten days, an undertaking the Ordnance authorities had pronounced impossible.  Lieutenant-Colonel Sharman was awarded the Order of St Vladimir with Swords, 4th Class, by the Czarist government in recognition of his work and leadership.  On his return to Canada in June 1919, he was appointed Brevet Colonel.

Colonel Sharman died in Ottawa on 15 May 1970.  His service to Canada and the guns of The Royal Regiment is unique.