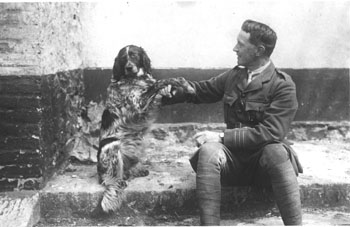 John McCrae was born in Guelph, Ontario, 30 November 1872.  He studied medicine at the University of Toronto, serving as residence house officer at Toronto General Hospital and at Baltimore’s John Hopkins Hospital.

Strongly influenced by his father Lieutenant-Colonel David McCrae, he became keenly interested in military matters.  As a school boy, he was a member of the Guelph Highland Cadet Corps, later joining the local Militia Field Battery.

In 1900, he volunteered for service in the South African War and was commissioned a Lieutenant in the Royal Canadian Artillery (RCA).  During this campaign he saw action with D Battery, Royal Canadian Artillery.  In one skirmish, his right section silenced the Boer guns near Rustenburg.  He returned to Canada, strongly influenced by what he had seen of war.

During the next fourteen years, he completed his medical training and lectured in pathology at McGill University, gaining wide recognition within his chosen profession.  A strong believer in service to one’s country, he continued to serve as a “Citizen-Soldier” in the Militia, attaining the rank of Major.

At the outbreak of the First World War, he immediately volunteered for service either as a doctor or as a gunner.  He achieved both.  He was appointed surgeon to the 1st Brigade, Canadian Field Artillery.  Always a gunner at heart, he would often direct the fire of the batteries in his sector, as frequently as his medical duties would allow.

The spring of 1915 found the 1st Brigade in Flanders.  Lieutenant-Colonel McCrae established his dressing station on the banks of the Ypres Canal, witnessing the ever-growing forest of white crosses.  It was here, amidst the heavy fighting, mud and carnage of the Second Battle that he penned his immortal poem, “In Flanders Fields.”  This poem was one of many.  In addition to being a soldier and physician, he was an accomplished poet.

During this battle, the enemy launched the infamous gas attack against the Canadians.  As well as caring for the wounded and dying, he would often relieve his close friend Colonel Morrison in directing the fire of the Brigade’s sixteen 18-pounder quick fire (QF) field guns.  He cut a unique figure wearing his gunner’s uniform from the South African War.

His Herculean efforts were soon to take their toll.  On 23 January 1918, he was observed to be unwell and was ordered to bed.  Later that night word was received that he had been appointed consulting physician to the First British Army and his superior rushed to his bedside to give him the good news.  McCrae’s condition was markedly worse.  The next day pneumonia was diagnosed.  His condition worsened steadily and just after midnight on 28 January, at age 45, he died.

The legacy of this remarkable man lives on.  His accomplishments as a soldier, a physician and a poet are reborn each November when his words remind us of the true cost of war.  This “Citizen-Soldier” has an assured place in Canada’s history.