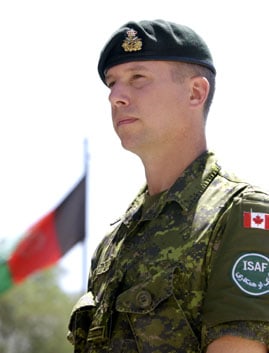 Andrew Leslie was born in December 1957.  He attended schools in Canada, the USA, France, Cyprus, and Switzerland.  His family has a tradition of military service.  He joined the Army Reserves in 1977 (30th Field Artillery Regiment).  While in London, England, as a graduate student, he was attached to the Honourable Artillery Company.  In 1980, he attended the International Peace Academy, United Nations (UN) Staff Seminar in Vienna, Austria.  In 1981, he transferred to the regular force and served with the 1st Regiment Royal Canadian Horse Artillery (1 RCHA) in Germany.  He completed the British Army Troop Commanders course, French Army Commando training, the hand-to-hand combat course and the combat intelligence course.

After a succession of field tours with mechanized and airborne combat units in Germany, Cyprus and Canada and command appointments up to the regimental level, he was promoted to Colonel in early 1995 and sent to the Former Yugoslavia as Chief of Staff Sector South (Brigade Level).  He was awarded the Meritorious Service Medal for his actions under fire during the fighting for Knin, in August 1995.  He then became Chief of Staff UNCRO (Division level), and finally Chief of Staff of UNPF (Mission level).  Following the UN handover to NATO forces, he returned to Western Canada as the Area Chief of Staff in 1996, serving in that capacity during the Manitoba floods of Spring 1997.

In July 1997, he became the Commander of 1 Canadian Mechanized Brigade Group (1CMBG), an infantry-heavy formation, where the focus was on live-fire combined arms training.  In early 1998, 1CMBG deployed to the South shore of Montreal to assist with ice-storm disaster relief operations, followed by an almost continuous cycle of Battle Group and Brigade exercises.  That same year he was awarded the Order of Military Merit.  In early 1999, 1CMBG tightened its focus on complex peace support/peacemaking missions in anticipation of deployment to Kosovo.

His training includes various courses such as the combat team commander’s course, Army Staff College and the Canadian Forces Staff College.  Promoted Brigadier-General in late 1999, he completed both the Advanced Military Studies and the National Security Studies Courses in Toronto.

In 2000, he became the J6 of the Canadian Forces.  He was responsible for the Groups and Regiments of the communications field force, signals/electronic intelligence, and computer network operations.  He was appointed Commander Land Forces Central Area in 2002, where he was responsible for one regular and three Brigade Groups and numerous support formations, training establishments, bases and units.