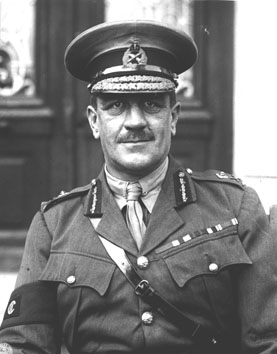 Born in Quebec, he graduated from Bishop’s College School, Lennoxville.  He was commissioned a Provisional Lieutenant, 29 October 1889, at the Royal Military College of Canada.

In March 1898, he served with the Yukon Field Force, arriving in Wrangell, 6 May 1898.  The arduous 400-mile trip to Fort Selkirk was completed by 11 September, followed by the short trip to Dawson City.

He served with the 2nd (Special Service) Battalion, Royal Canadian Regiment in South Africa, seeing action in the Orange Free State and the Transvaal, in 1900.  He was seconded to the South African Constabulary until May 1902.  He was twice Mentioned-in-Dispatches and appointed Brevet Major.

He served with the Royal Canadian Horse Artillery (RCHA) from May 1907 until May 1911.  In May 1908, he was promoted Lieutenant-Colonel.  After leaving the RCHA and until the outbreak of the First World War, he commanded the Royal Canadian Artillery (RCA).  He held various appointments including, Inspector of Horse, Field and Heavy Artillery, Commandant Royal School of Artillery and Officer Commanding Royal Canadian Coastal Artillery, Quebec.  His technical gunnery abilities and insistence on the highest standards during training would save countless lives in the cataclysm soon to come.

On 1 September 1914, he was appointed to command the artillery of the Canadian Expeditionary Force.  The assembly and training took place in Valcartier.  On 1 October 1914, after a short, intensive training period, the guns, horses and men of the Canadian Contingent departed for the Great War.

Training continued on the Salisbury Plain.  He demanded excellence in equitation, ranging, fire discipline, entrenching and camouflage.  Under his command, the Canadian Divisional Artillery embarked for France, 7 February 1915.  The entire formation was ashore by the 16th, gaining the distinction of being the only fighting formation to arrive in France as a single entity.  At 10:15 on the morning of 2 March, the 1st Battery, 1st Brigade, Canadian Field Artillery fired the first Canadian artillery round, opening a new era for the Canadian Army.

On 1 September 1915, he was promoted Colonel and appointed Brevet Brigadier-General.  On 15 June 1915, the Canadians began preliminary arrangements for the assault on two vital points opposite Givenchy-Les-la Bassée.  Under his direction, these arrangements would stand as a model for future operations of the Canadian Corps.  They included 18-pounders fitted with armour plating, deployed forward at ranges between 75 and 3000 yards, engaging enemy strong points.

He was appointed General Officer Commanding Royal Artillery, First Canadian Corps, 13 September 1915, a newly created appointment.  His preparations for the Mount Sorrel counter-attack included a ten-hour bombardment of Hill 60 and Sanctuary Wood.  His gunners were accurate and effective.  In this fire plan, they incorporated the first smokescreen.  Fired by Stokes Trench Mortars, the screen was useful and would soon become a regular function of field artillery.

On 15 December 1916, he was promoted Major-General and appointed to command the 2nd Canadian Division, until early 1919.  After his return to Canada, 31 May 1919, he was appointed to the General List.  Promoted Lieutenant-General, 15 August 1920, he served as Quartermaster General and Inspector General.

After a distinguished career, he retired in October 1923.  His innovation, training techniques and practical use of the Canadian Guns set the stage for the significant advances made by the next generation of Canadian Artillerymen.  He died in 1945.