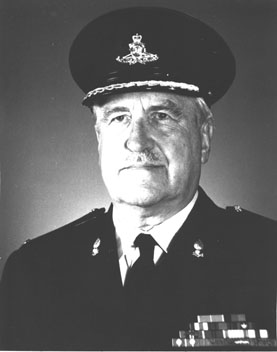 A member of one of Canada’s most distinguished military families, Lieutenant-General William Alexander Beaumont Anderson was born in Montreal, 7 May 1915.  His father, the late Major-General W. B. Anderson, CMG, DSO of Ottawa, was a former Commander of Military District No. 3.  His uncle, Major-General T. V. Anderson, DSO, was Chief of the General Staff at the outbreak of the Second World War.  His second uncle, Colonel A. A. Anderson, DSO, was second-in-command of the Royal Canadian Signals Training Centre, Kingston, during World War II.

He received his education at the Rothsay Collegiate School in Saint John, New Brunswick, where his interest in the military became evident.  He joined the Frontenac Regiment at age 13 and entered the Royal Military College in 1932.  During his college years, he spent two summers training with the Royal Canadian Navy, the first as a Cadet at HMCS Stadacona and the next aboard HMCS Saguenay.  Graduating in 1936, commissioned a Lieutenant in the Royal Canadian Horse Artillery, he was subsequently placed on leave to attend Queen’s University.  He then served with “A” Battery in Kingston and “C” Battery in Winnipeg.  In 1939, he attended the Artillery Staff Course and was completing the latter portions of this training when the Second World War broke out.

On mobilization, he was appointed Adjutant of the 3rd Field Regiment and went overseas in December 1939.  The following May, he was named Staff Captain, Royal Artillery at the 1st Division Artillery Headquarters and led the advance party on the abortive trip to Brest, France, in June 1940.  Several staff appointments at the Canadian Military Headquarters in London followed, as well as attendance at the Camberley Staff College in 1941.  He was given command of 15 Field Regiment in 1943. Relinquishing control in May 1944, he served as General Staff Officer, Grade One (Operations) at Headquarters First Canadian Army.  Returning to Canada, in February 1945, for assignment to the Pacific Force (6 Canadian Division) as Deputy Commander, Royal Artillery.  The Pacific Force disbanded before he could take up his appointment.

Promoted Colonel in 1946, he was appointed Director of Military Intelligence, attending the National Defence College in 1949, with his appointment as Director of the Canadian Army Staff College.  Later, in the rank of Brigadier, he commanded the Western Ontario Area and 1 Canadian Infantry Brigade Group in Germany.  In 1956, he attended the Imperial War College.  From 1957 to 1962, he held the successive appointments of Vice Adjutant General, Deputy Chief of the General Staff and Commandant of the Royal Military College.

In January 1962, he was promoted Major-General and appointed Adjutant-General, a position he held until the army reorganization in 1964.  He then chaired the study group tasked to produce a career management plan for officers.  In October 1965, he was appointed Deputy Chief of Reserves.  In July 1966, he was promoted to Lieutenant-General and given command of Canada’s army, Mobile Command.

Active in his community, as past President of the Royal Life Saving Society of Canada, he served as a member of the Advisory Council of the Niagara Institute, and as Honourary Governor of the National Ballet of Canada.  In September 1986, he accepted the appointment of Colonel Commandant, The Royal Regiment of Canadian Artillery.  He relinquished this appointment, in 1992, after six additional years of distinguished service to the Royal Regiment.

With more than forty-five years of service and rising from the ranks to command Canada’s army, Lieutenant-General Anderson made a significant contribution to his country and his Regiment.  He passed away in Ottawa in 2000.