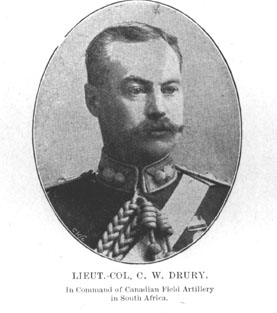 Often referred to as the “Father of Modern Artillery in Canada,” Charles William Drury, maintained the interests of Canadian Gunners foremost throughout his life.  He commissioned in January 1874, at eighteen years of age, in the New Brunswick Garrison Artillery Brigade in Saint John.  His aptitude for the technical field artillery work and his ability to put this knowledge to work effectively was recognized immediately.

As a Captain, he served during the North-West Rebellion in 1885, commanding the field division of “A” Battery Royal Canadian Artillery (RCA).  His tireless efforts to introduce indirect fire techniques despite the inherent unsuitability of his equipment was a clear indication of his progressive thinking.  For his splendid work and constant vigilance during this campaign, he was Mentioned-in-Dispatches.

As a junior officer, he fully appreciated the difficulties of winter mobility experienced by the field artillery.  His innovative and practical design for field gun and ammunition sleighs allowed identical “Into Action” drills, in both winter and summer.

At the time of the Permanent Artillery re-organization in 1893, then a lieutenant-Colonel, he was appointed to command “A” Battery, Royal Canadian Field Artillery at Kingston, while simultaneously appointed Commandant of the Kingston-based Royal School of Artillery.  In 1893, he attended the opening of the Imperial Institute in London.  While in England, he studied the new system of fire discipline used by the British Army.  Upon his return, he taught the new system to his instructional staff, preparing for the winter’s courses and the annual training in the summer of 1894.  This particular summer training activity incorporated his realistic, moving and automatically appearing targets; a system later adopted and used by cavalry and infantry.

During the South African War, he was dispatched on special duty with the 1st Canadian Contingent and appointed to command the Canadian Field Brigade of Artillery.  As the nature of the war dictated the dispersal of artillery formations, he was appointed to command various mixed arm organizations.  For his services in this theatre, he was Mentioned-in-Dispatches and appointed a Companion of The Most Honourable Order of the Bath.

Throughout this campaign, the experiences of this practical and technically proficient gunner fostered many innovations.  He recognized the need to increase the lethality of artillery ammunition and the requirement to develop smokeless propellants as an aid to concealment.  He advocated the deployment of artillery, behind cover or on reverse slopes, where the gunners could work unobserved and unimpeded by enemy actions.  He believed that indirect fire should become the artillery’s standard method of deployment.  On his return to Canada, the adoption of these improvements remained his constant goal.

In April 1905, he commanded the Military District Number 6 at Halifax.  The withdrawal of the British troops from Halifax was a politically sensitive matter, and his steady hand was at the helm.

The Canadian Forces promoted him to Major-General in June 1912.  He died, less than a year later, at age fifty-seven.