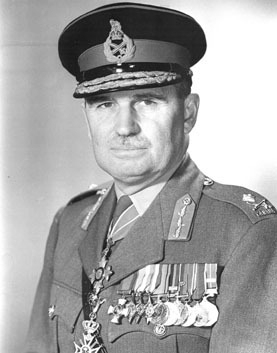 Major-General Edward Chester “Johnny” Plow was born in St. Albans, Vermont, in September 1904. Educated at Lower Canada College, he entered the Royal Military College in 1921. His elder brother John, preceded him to the college and the practice of referring to new cadets by their elder brother’s Christian name was followed; for the rest of his life he bore the name, “Johnny”. He later returned to the college where he lectured in gunnery and in military history.

His first posting was to “B” Battery, Royal Canadian Horse Artillery (RCHA) in Kingston where he played a prominent role in the mechanization of the RCHA. In 1930, he brought the first Leyland trucks and Crossley six-wheeled staff cars to Kingston and later studied mechanization in the United Kingdom. On return to Kingston, he was appointed RCHA Brigade Adjutant.

At the outbreak of war he was attending a staff course in England and he remained there to join his battery in December 1939. After a brief appointment as Brigade Major Royal Artillery, 1st Canadian Division, he commanded the 8th Army Field Regiment (Self-propelled) and later the following year became the 1st Canadian Corps initial Counter-Bombardment Officer. Concurrent with promotion to Brigadier in the spring of 1942, he assumed the post of Commander Royal Artillery, 3rd Canadian Division, followed by appointment as Commander Corps Royal Artillery, 1 Canadian Corps in December 1943.

While on the Ortona front, he became concerned with the inability of the Counter-Battery Organization to deal with enemy mortars effectively. Under his guidance, a dedicated Counter-Mortar Organization was developed and fielded.

Returning to North-West Europe in December 1944, as Brigadier Royal Artillery at Headquarters First Canadian Army, he planned the deployment of the artillery assigned to support Operation VERITABLE, in total over 1,000 guns. The deployment was hampered by an early thaw, restrictions on daylight movement and complicated by the immense quantities of ammunition needed. On 8 February, with only hours to spare, all guns reported ready; the Brigadier smiled.

At war’s end, he commanded the artillery component of the Canadian Army Occupation Force and in October departed the continent to assume an appointment in England. Prior to the cessation of hostilities, the Brigadier set up a committee to consider how best to recognize the contribution of Canada’s Gunners. His work led to a series of bursaries in the years 1946 to 1951, grants to the Disabled Fund of the Department of Veteran’s Affairs and to the erection of the National Artillery Memorial at Major’s Hill Park near Parliament Hill.

In the post-war era, Brigadier Plow organized the Directorate of Armament Development and the Directorate of Artillery at Army Headquarters. He commanded British Columbia Area for one year followed by a two-year appointment as the Senior Canadian Liaison Officer, London, England. Concurrent with promotion to Major-General in February 1951, he was appointed to command Eastern Command, a position he held until his retirement in 1958. He enjoyed the life and the people of Halifax and quickly earned their respect and cooperation.

On 15 January 1959, Major-General Plow was appointed Lieutenant-Governor of the Province of Nova Scotia. This vice-regal appointment was well received by the citizens of Nova Scotia and was a fitting culmination of a lifetime of service.