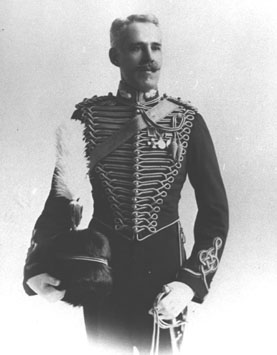 Major-General Henri Alexandre Panet was born in Quebec City, 24 July 1869.  He graduated from the Royal Military College in the summer of 1891, qualifying as a Lieutenant in the Royal Canadian Artillery, 2 May 1894.

In October 1899, he was placed on establishment of the 2nd (Special Service) Battalion, Royal Canadian Regiment.  He was dispatched, as part of the 1st Contingent for service in South Africa, to join C Battery on its arrival.  He was disappointed to learn that his battery would not arrive until March, fearing that after Buller’s relief of Ladysmith and the surrender of General Cronje at Paardeberg Drift, there would be no opportunity to see action.

His fears proved groundless as C Battery, assigned to the Rhodesian Field Force, began an epic journey.  Panet sailed with his battery from Cape Town to Beira, Portuguese East Africa.  They debarked and began their march through Rhodesia and the Transvaal to link with Colonel Plummer’s forces for the relief of Mafeking.  This memorable march was described by Field-Marshall Lord Roberts as “one of incredible rapidity.”

Under Panet’s direction, a fortified camp was built at Rustenberg, named Fort Canada.  Sections of C Battery supported small mounted columns operating from this safe haven, making a dozen sorties in the surrounding country.  In recognition of his work in this campaign, he was awarded the Distinguished Service Order.

In May 1901, he returned to Canada, receiving a promotion to Major.  He was appointed Staff Adjutant at the Royal Military College.  Following two senior staff appointments during the period 1905-1909, he was appointed to command B Battery.  The battery prospered under his leadership, twice winning the coveted Royal Canadian Field Artillery Challenge Cup.

He was promoted to Lieutenant-Colonel on 1 May 1911.  He accepted the appointment to command the Royal Canadian Horse Artillery Brigade, and as Commandant of the Royal School of Artillery, Kingston, positions he held until late 1916.  During his tenure, he took a personal interest of all aspects of training.  His brigade was deeply involved in the training of the artillery units of the Active Militia.  In 1912, twenty-six field batteries from eastern and central Canada assembled for training at Camp Petawawa.  Lieutenant-Colonel Panet supervised the training.

His involvement was summed up in the words of a First World War Gunner, “I can only say that the Canadian Artillery could never have done the job it did without the wonderful pre-war training we had under the officers and gunnery instructors of the RCHA at Petawawa, with such men as Burstall, Panet, Elkins, Boak, Constantine and many others. To them Canada’s debt is very great.”

On the eve of the First World War, he was with his Brigade in Petawawa. They soon left to Valcartier to assist in the administration and training of the Canadian Expeditionary Force.

On 26 August, the Brigade was mobilized.  On 1 October, they departed for England to spend a miserable winter on the Salisbury Plain.  He deployed to Flanders with his Brigade on 25 July 1915.  After being held in reserve, they finally went into action on the Somme in late November.  On 24 June 1916, he was promoted Colonel and Mentioned-in-Dispatches.  He was to receive this distinction a total of seven times.

In December 1916, he was promoted Brigadier-General and appointed Commander, Royal Artillery 2nd Canadian Division until April 1919.  He was promoted again on 4 May 1921.  He served as District Officer Commanding Number 1 District from October 1919 until June 1922 and in the same appointment in Number 2 District from June 1922 to June 1923.  He was appointed Adjutant General on 1 July 1922.  He retired to pension on 31 December 1930, having served The Royal Regiment for more than 40 years.

He continued to serve The Royal Regiment after his retirement, as the Colonel Commandant.

He died in Kingston, 14 August 1951, and buried with full military honours.