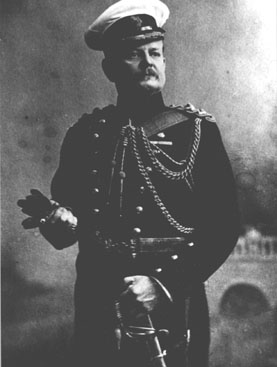 Major-General James “Cupid” Wilson was born in 1852 at Kingston, Ontario; after a short service as an Ensign with the 47th Battalion of Volunteer Infantry, he joined the Kingston Field Battery in 1871 and was attached to “A” Battery of the Permanent Force. He was one of the original officers of “A” Battery.

In 1884, in the rank of Major, he volunteered for service in Egypt and subsequently was seconded to 1st Brigade, Royal Artillery for duty in the Sudan. His service as a combatant in this campaign earned him the distinction of being on the first of the Canadian Permanent Force to see overseas service. He acquitted himself well and was Mentioned-in-Dispatches and awarded the Khedive’s Star.

In 1885, he was recalled from the Sudan for service with “A” Battery in the North West Rebellion. He was given the unenviable task of garrisoning Fort Otter at Batoche during the winter of 1885 just prior to the Battery’s return to Kingston.

In July 1892 he led a strong detachment of gunners to Ile-aux-Coudres, in the St Lawrence, where he captured Captain Bouchard, the “Smuggler King”, along with a plentiful cache of contraband liquor.

With the reorganization of the Regiment in 1893, the dismounted portions of “A” and “B” Batteries and the whole of “C” Battery were reformed into Number 1 and Number 2 Companies, Royal Canadian Garrison Artillery at Quebec; Brevet Lieutenant-Colonel Wilson was appointed to command Number 1 Company.

On 1 May 1903, Brevet Colonel Wilson became the first Canadian-born Colonel Commandant of The Royal Regiment of Canadian Artillery. One year later his career of distinguished service was recognized by his appointment as Honourary Aide-de-Camp to the Governor-General, Lord Earl Grey.

On the opening of Camp Petawawa in 1907, Colonel Wilson became the first Camp Commandant. His quarters, a modest house on a small hill still bears the name “Cupid’s Nest”…the Colonel had quite a reputation as a lady’s man.

On 15 November 1907 Colonel Wilson achieved another first. He became the first Canadian-born Major-General of the Permanent Force. This well deserved promotion and recognition was not without its irony however; the promotion message read, “Colonel J.F. Wilson, ADC, Colonel Commandant, RCA, having been found medically unfit for service is placed on the retired list and granted the honourary rank of Major-General on retirement”. Thus ended a 41-year career of service; a career that included a significant number of first and a long, distinguished service to The Guns.