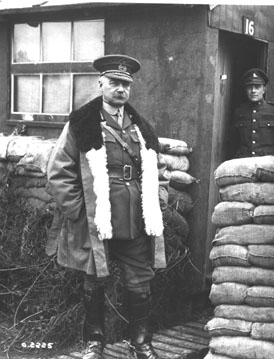 Major-General “Dinky” Morrison was a leader in both civilian and military life.  For the greater portion of his life, he served both worlds as “Citizen-Soldier.”

He was born in London, Ontario, 6 July 1867.  He was a journalist by profession.  For sixteen years he was the Editor-in-Chief of the “Ottawa Citizen.”  He devoted a large measure of his energies to the advancement of the Militia Force.  His military career began with his appointment as a Second Lieutenant with Hamilton’s 4th Battery, Canadian Field Artillery.  He distinguished himself early in his career attaining extraordinarily high marks during artillery training.

As a subaltern with “D” Battery, Royal Canadian Artillery (RCA) in the South African War, he was awarded the Distinguished Service Order for conspicuous courage and leadership, saving the guns at Leliefontein, 7 November 1900.  Upon his repatriation to Canada, he returned to his civilian career and to his service with the Militia Force.  He was appointed Brevet Captain, serving in various capacities for the next decade.

When the Canadian Contingent was raised for service in the First World War, as Director of Artillery, he convinced the Minister of National Defence that the Divisional Artillery should be composed of existing units.  This action kept officers, non-commissioned officers and men together.  This regard for homogeneity greatly enhanced the efficiency of the artillery in the Canadian Contingent.

Major-General Morrison was first, last and always a Gunner.  As a young man, he was an earnest student of artillery, training and tactics.  His abilities as a leader and as a gunner were evidenced by the sustained efficiency and excellent shooting of all units under his command.  His work with the Artillery of the Canadian Corps, in the great series of battles from Vimy Ridge until the Armistice, confirmed his stature as a remarkable artillery commander.

In the reorganized post-war Permanent Active Militia, he held successive appointments as Deputy Inspector General of Artillery, Master General of Ordnance and Adjutant General.  He retired in 1924, as a result of ill-health.  He died at age 58, the following year.

Major-General Morrison was the epitome of a Citizen-Soldier.  His concern for his country and belief that service to one’s Sovereign was the duty of every citizen, provided a bench mark for future Canadians.