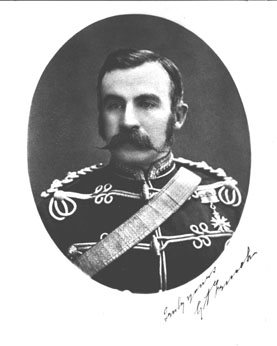 He was born in Ireland in 1841. George Arthur French served for a short period with the Royal Irish Constabulary, before entering military service.  He attended both Sandhurst and the Woolwich Military Academies.  He was commissioned in the Royal Artillery, in 1860.

On arrival to Canada, in 1862, he was employed as Adjutant Royal Artillery at Kinston, Ontario, a position he held for four years.  His superiors described him as, “a fine officer, but on occasion his sound military knowledge and attributes were prone to clash with political and civil phases of Canadian life.”  With the departure of the Royal Artillery from Canada in 1871, he became Inspector of Artillery and Warlike Stores (a position he shared with his counterpart in Quebec).  He served as Commandant of the School of Gunnery, Kingston, and Officer Commanding “A” Battery.  His administrative competence, vast experience and attention to detail were soon evident.  “A” Battery achieved a remarkable proficiency within one year.

In August 1873, Colonel French accepted the offer to become the founding Commissioner of the North-West Mounted Police, an organization already formed at Lower Fort Garry.  French had a characteristic disdain for bureaucracy and red tape.  He demanded an even-handed interpretation of the law, respect for human dignity and common sense.

Driven by the reports of increasing lawlessness in the West, he began the detailed planning for the deployment of his force in Western Canada.  He soon realized that a more significant force than that initially planned would be required.  Due to the remoteness of the land, they would have to carry all the items necessary to be self-sustaining.  With an eye for detail, he supervised the assembly and shipping of the thousands of items.  Realizing the critical nature of the living element of his force, he took particular care in the selection of both horses and men, accepting only the best.

Facing the formidable task of bringing the law to the vast Canadian West would be a monumental undertaking.  Word that armed outlaw camps had been established and were defended by cannon (taken by force from the United States Army) gave urgency to the task.  As a precaution, Commissioner French requested two or three guns for the force.  He received two 9-pounders and two mortars.

On 6 June 1874, “D,” “E” and “F” Troops left Toronto on the first leg of their epic journey.  He led his column from Fargo, North Dakota to Dufferin (65 miles south of Winnipeg), joining “A,” “B” and “C” Troops.  By the 19th, the force was ready to depart, much to the dismay of the locals who saw this as a golden business opportunity.

On 8 July, he led his column west from Dufferin, beginning the Force’s Great March.  The men and animals suffered in the heat, wet and cold.  Often deprived of food and shelter, they stoically followed Commissioner French ever westward.  The trek from Fargo to Dufferin, to the Belly River, Milk River, Fort Pelly, and through Winnipeg to Dufferin was accomplished in 102 days.  They covered an average of 19-1/5 miles a day.  A string of North-West Mounted Police outposts crossed the Canadian West.  Much to the credit of French and his constables, a friendly and trusting relationship had been established with the prairie tribes.  The force had established itself as the law in the Canadian West.

The conclusion of this historic march brought to a head the strained relationship that existed between French and his political masters.  He terminated his relationship by resigning from the force and returning to Imperial Service.  He served in Queensland, Australia, in 1883, India, in 1895, and New South Wales, Australia, in 1899.  He was promoted to Major-General in 1900 and knighted by his Sovereign in 1902.  He retired that same year.  Major-General French died in England, 7 July 1921.

General French is among the builders of Canada.  His association with the Royal Canadian Mounted Police and with The Royal Regiment of Canadian Artillery is a source of pride for both organizations.