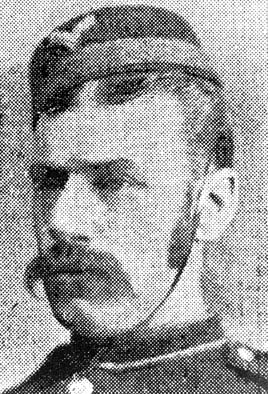 Born in Quebec City in November 1852, young William Jordan became attracted to the military early in life. In 1866, at thirteen years of age, he enrolled as a boy bugler in the 8th Royal Rifles of Canada and served in the Fenian Raids of 1870.

With the withdrawal of the British Regular Troops from Canada in 1871 and the formation of Canada’s permanent army, he transferred to the Quebec Garrison Artillery. Later that same year he enrolled in “B” Battery at the Citadel. Gunner Jordan set a number of firsts as a Canadian Army Regular: he was the first soldier to pass the medical examination for military service, the first to sound the call for parade and the first to stand as a sentry in the new army. He also was among the first to enrol; records indicate that he was attested into “B” Battery on 13 November 1871 and assigned regimental number 28.

He served the guns of “B” Battery throughout his career, rising steadily through the ranks. He attained the rank of Sergeant in 1885 while serving in the North West Rebellion. His steadiness and leadership are mentioned in the unit account of the action at Cut Knife Creek.

A robust, energetic and physically active soldier, Sergeant-Major Jordan excelled in sports. He was an expert swordsman, achieved distinction with a single stick (a hilted sword-length wooden stick which was wielded with one hand), was a specialist at the 400-yard track event and an accomplished cricketer and footballer. He also was the Quebec Provincial featherweight and lightweight boxing champion for several years.

On the occasion of the visit of Her Royal Highness Princess Louise and the Marquis of Lorne, the Cidadel hosted an “Assault-at-Arms” tournament. Jordan proved to be the class of the field, outscoring everyone in sword, bayonet and single stick. Even the heavily favoured members of the Royal Navy Squadron team proved no match for this talented gunner.

Sergeant-Major Jordan served continuously until 1905 when he was discharged to pension. The comments recorded in the Regimental Record of Service Book indicate that his service was considered “Exemplary”. Rare, high praise in an era noted for understatement. After two years on pension, the quiet life lost its appeal and he re-enrolled in the unit where his military service began, the 8th Royal Rifles of Canada; here he served until 1914. His total service to Canada of 46 years stands as a remarkable achievement.

On 23 May 1930, at the age of 78, Sergeant-Major Jordan stood proudly beside the oldest living Commanding Officer of the RCA, Major-General R.W. Rutherford and two other old comrades, Professor H. Walters and Sergeant-Major W.R. Abbott in front of the RCHA Memorial in Kingston. There, this august group laid wreaths on the occasion of the first “reunion” and the formation of the Royal Canadian Artillery Active and Ex-Members’ Association.

Sergeant-Major Jordan died at his home in Quebec City in 1938. His career was remarkable; his long and dedicated service to the guns has earned him a rightful place in the history of The Royal Regiment.