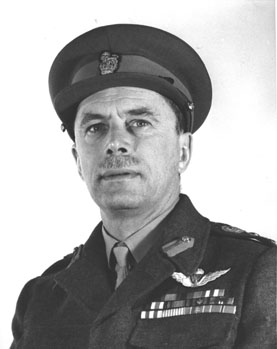 The son of another distinguished Canadian Gunner, Brigadier-General Edward Murray Dalziel “Teddy” McNaughton, was born in Guildford, Somerset, England, in October 1918.  To comply with the terms of an inheritance, he later changed his last name to Leslie.  He was educated in the United Kingdom and at Montreal’s Loyola College.  As a Gunner, he enlisted in the 1st Field Battery of Ottawa.  Earning his commission in 1938, he enrolled in the Permanent Force the following year, initially serving with “B” Battery, Royal Canadian Horse Artillery.

He went overseas in December 1939, serving in the United Kingdom as an Instructor-in-Gunnery at the Canadian Army School of Artillery (Overseas), in Italy with the 5th Medium Regiment and in North-West Europe as Brigade Major, Royal Canadian Artillery, 5th Canadian Armoured Division.  Promoted to Major in 1942, he was Mentioned-in-Dispatches on three occasions and awarded the United States’ Bronze Star.  In 1943, he was selected to attend the Camberley Staff College.

Returning to Canada in 1945, he trained with the Pacific Force (6th Canadian Division) and later returned to Europe for duty with the Canadian Army Occupation Force in Germany.

In 1951, he was promoted and appointed to command the 1st Regiment, Royal Canadian Horse Artillery (1 RCHA), leading the regiment to Korea in the spring of 1952.  By 5 May, the 1st Regiment was fully in place and in action supporting the Commonwealth Division.  His example of leadership, technical gunnery skills and personal courage were inspirational to his officers and men.  His fire plans were cited on numerous occasions by his supported army commanders, as the decisive factor in their operations.  His consistent, unflagging efforts to provide the best possible fire support were recognized in the award of the Distinguished Service Order.  He led his regiment home to Winnipeg, after firing more than 300,000 rounds.  Relinquishing command in 1955, he was assigned to Army Headquarters, Ottawa.

After training at the US Armed Forces Staff College, Norfolk, Virginia, he was appointed Staff Planner with the NATO Standing Group in Washington.  In March 1961, he was promoted Colonel and assumed command of the Royal Canadian School of Artillery at Camp Shilo, Manitoba.  His considerable leadership skill and love of artillery had a profound influence on the thousands of Gunners who passed through the school.  In August 1966, he was promoted to Brigadier and appointed Commander 2nd Canadian Infantry Brigade Group, Petawawa, Ontario.

In the summer of 1968, he was appointed Chief of Staff of the United Nation’s Force in Cyprus, the first Canadian officer to hold that position.  His energetic and professional manner rapidly earned the respect of other national contingents and the trust of the opposing factions.

Returning to Canada in July 1972, he commanded Canadian Forces Base Borden, until his retirement in November of that same year.  In January 1975, he accepted the appointment of Colonel Commandant, The Royal Regiment of Canadian Artillery, a task he undertook until his death on 3 August 1979.

He was a passionate advocate of Canada.  He was deeply committed to his profession, to his Regiment and his soldiers.  He is remembered fondly by three generations of Canadian Gunners for his unique character, love of life and dedication to his “Gunner Family.”