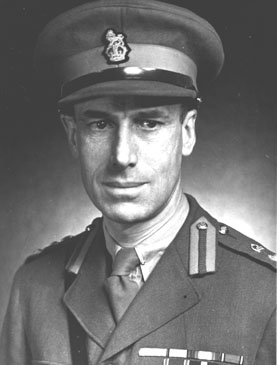 A native of Ottawa, Brigadier Percy Arthur Stanley Todd graduated from the Ottawa Collegiate Institute.  In 1915, he was one of 200 eager young men who undertook a seven-day examination to compete for one of the fifty-three positions at the Royal Military College.  After winning a place, he completed the intensive wartime one-year course.  In 1916, he was a 2nd Lieutenant in the Royal Artillery and embarked for the United Kingdom.

After training in England, he went to Egypt in July 1917.  After more than one year in Egypt and Palestine, he contracted diphtheria.  The British military transferred him to Cairo and then to England.  In 1919, he left the British Army and returned to Canada.

After a brief relapse with his illness, he became the City Manager for an insurance company, all the while continuing to serve in the Governor General’s Foot Guards of the Non-Permanent Active Militia.  In January 1921, he transferred to the 1st Field Brigade, Royal Canadian Artillery, where he continued to serve until the outbreak of the Second World War, rising to command the Brigade as a Lieutenant-Colonel.

Early in 1940, he volunteered for active service, reverting to the rank of Major to do so.  After seeing his Gunners off to England, he spent six months instructing at the Canadian Artillery Training Centre in Kingston.  He was soon appointed to command a battery of the 5th Field Regiment.  In November 1941, he was a Brigade Major at Headquarters, Royal Canadian Artillery, 2nd Canadian Division.  In late 1942, he received the Order of the British Empire and commanded the 4th Field Regiment.  He held command for a full year, until his appointment in January 1943, as Commander, Royal Artillery, 3rd Canadian Division with concurrent promotion to Brigadier.

He was responsible for the training, preparation, and implementation of the massive tri-service fire plan, supporting the 3rd Division D-Day assault on Normandy.  He coordinated the fire support from the bridge of H.M.S. Hilary.  The need to fire artillery from the deck of pitching landing craft in rough seas and the unique control measures necessary presented many challenges.  The success of the landings was clear evidence of his meticulous preparations.  He received the Distinguished Service Order in recognition of his work.

In November 1944, he commanded the Corps Royal Artillery, 2nd Canadian Corps.  He then commanded the 1st Canadian Infantry Brigade (often referred to as the Canadian Berlin Brigade) until June 1945.  After the war, he returned to Canada and left the Permanent Force.

Returning to civilian life, Brigadier Todd assumed the appointment of General Manager of the Hamilton Street Railway, maintaining his long association with the army.  He was appointed Commander, Royal Artillery, 1st Division (Militia) in January 1946, a position he held until September 1954, when he transferred to the Supplementary Reserve.  He served as Honourary Colonel of the 18th Field Regiment from 1954 until 1959, and as Honourary Colonel Commandant of The Royal Regiment of Canadian Artillery from 1958 until 1962.  In this latter role, he represented all Canadian Gunners.

Brigadier Todd played a key role in the reopening of the Royal Military College after the war and served as Chairman of the Conference of Defence Associations.  He has a long and distinguished record of service to his country and to The Guns.