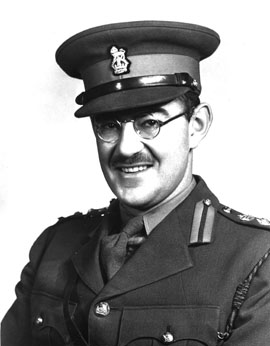 An Alberta native, Brigadier William Smith Ziegler was born in Calgary and received his early education at the Strathcona High School in Edmonton. He later attended the University of Alberta, graduating with a degree in Civil Engineering.

Having enlisted in the 61st Field Battery of the Non-Permanent Active Militia in 1926 as a boy (in those days one would not be considered a Gunner before age 18) he earned his first chevron in 1928 and by 1931 was Battery Sergeant-Major. Commissioned the following year, he rose to the post of Adjutant 20th Field Brigade by 1938.

In 1939, while still attending university, he was mobilized with the 1st Canadian Division, and in January 1940, went overseas. He served as Battery Captain 61st Field Battery and later in the same position with “X” Super Heavy Battery. Selected because of his considerable experience, he returned to Canada to become the first Brigade Major Royal Artillery of the 3rd Canadian Infantry Division. He shortly found himself en route to the United Kingdom once again, this time to attend the Camberley Staff College. On completion, he was appointed to the staff of the First Canadian Army as General Staff Officer (Grade 1), Royal Artillery.

In May 1943, he was given command of the 13th Field Regiment. During his tenure as Commanding Officer the Canadian Artillery, his unit worked hard at mastering the intricacies of the handling and using artillery. From October 1943 until February 1944, he served as “Colonel GS Staff Duties and Training” at Canadian Military Headquarters in London. Early in 1944, he left the regiment and was promoted Brigadier to fill the appointment of Commander, Royal Artillery in 1st Canadian Infantry Division, then on Italy’s Ortona Winter Line. By the end of April, the Canadian guns were out of action and ready to assume the spring offensive. Ahead of them on the road to Rome lay the Liri Valley with its three fortified defence lines: The Gustav Line anchored on Monte Casino, the Hitler Line hinged at Mount Cairo and the Caesar Line some thirty kilometers South-East of Rome.

Ziegler’s skillful use of artillery and his masterful fire plans during the Liri Valley operations contributed to the success of the advance to Rome and resulted in his appointment to the Distinguished Service Order. At the end of operations in Italy in early 1945, the Brigadier accompanied his gunners to North-West Europe and a role in the final defeat of the Third Reich. His dedication and good work were recognized in September 1945 with his appointment to the Most Excellent Order of the British Empire in the grade of Commander.

At the end of hostilities, Brigadier Ziegler served with the British Foreign Office (German Section). He was Deputy Commander Hannover Region with the Control Commission for Germany and later, until 1950, served as the Regional Administration Officer, Land in Niedersachsen.

Active in a wide variety of community related activities, he served as an advisor to the University of Alberta School of Commerce, as Governor of the Arctic Institute of North America, as Director of the Alberta Chamber of Resources, on the Advisory Board of the Salvation Army and as a member of the Alberta and Northwest Territories Council, the Duke of Edinburgh Award in Canada.

Brigadier Ziegler’s contributions to the Royal Regiment and to Canada will inspire future generations of Canadian Gunners to the service of Canada. He passed away in Edmonton in 1999.