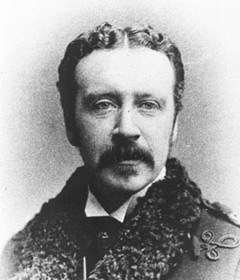 Colonel De la Cherois T. Irwin was born in Ireland on 31 March 1843.  He entered the Royal Militia Academy, Woolwich, in 1860.  He became a 2nd Lieutenant in the Royal Artillery in 1861.  He was posted to the 10th Brigade, then under an order for duty in the West Indies.

The “Trent” affair created the potential for war with the US, and the 10th Brigade headed to Halifax.  Irwin’s battery journeyed from Saint John, New Brunswick, to Montreal in sleighs, February 1862.  He spent the next eight years in Montreal, Kingston and Quebec City, marrying in 1867.

During these early years, he studied hard at mastering his profession.  He gained the distinction of passing the entrance exam to the British Army Staff College, standing fourth in the entire British Army.  He spent two years at Sandhurst.  While at the College, he accepted the appointment of Assistant Inspector of Artillery and Warlike Stores for the Dominion.  He was posted to “A” Battery, the School of Gunnery, at Kingston and promoted Major in the Canadian Militia.  When Colonel French, the senior Inspector, left in 1873 to organize the North-West Mounted Police, Major Irwin succeeded him as Commandant of the School of Gunnery and as Officer Commanding “A” Battery.  In January 1876, he became Inspector of Artillery and Warlike Stores; an appointment shared with Lieutenant-Colonel Strange.

In 1878, Lieutenant-Colonel Irwin was called upon to erect the defensive works around Victoria and to organize a battery for defence.  The arrival of a Russian Squadron, in San Francisco harbour, provided a sufficient threat to stimulate immediate action.  Britain immediately released some naval guns.  They constructed the sites quickly and trained the battery.  With a shortage of qualified assistants, he depended on local labour.  He made personal supervision of each detail necessary.  Within four months, they installed one 8-inch, three 7-inch and four 64-pounders.  They trained fifty men ready to operate the guns.

In 1882, Lieutenant-Colonel Strange retired, and Lieutenant-Colonel Irwin succeeded him to command all the Artillery of Canada.  He retired from the Royal Artillery and joined the Canadian Militia as Headquarters Staff in Ottawa.  He was now able to carry out a reform that had long been on his mind.  The organization of the independent units of the Canadian Artillery became a single regiment.  He served as the Regiment’s first Commanding Officer.  Through his efforts, the Canadian Artillery was granted the distinction “Royal,” in 1882.

He was responsible for significant improvements, a better ration scale, the establishment of separate mess rooms, the preparation of rations by a Sergeant Cook, the expansion of the Royal Schools of Gunnery in Kingston and Quebec, the addition of a second Garrison Battery stationed at Quebec and the purchase of the Deseronto training area.

He was instrumental in organizing the Canadian Artillery Association, the forerunner of all the militia associations, initiated a system of internal inspections and reforms, increasing the efficiency significantly and esprit de corps of all Canadian Artillery units.

On 1 July 1897, he retired after twenty-five years of service, fifteen years as head of the Canadian Artillery.  His career was not spectacular.  His record of reliability, useful work, performed quietly and modestly, with the good of The Regiment always foremost speaks for itself.

In retirement, he continued to enjoy his lifelong activity as an artist and remained active in numerous philanthropic organizations.  He introduced golf to Ottawa; it remained one of his favourite activities.

Colonel Irwin died in Washington at the age of eighty-five on 19 March 1928.