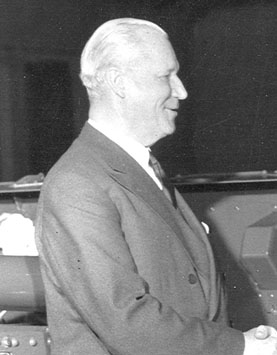 Named for his grandfather, a member of Sir John A. MacDonald’s Confederation Cabinet, George Alexander Drew was born in Guelph, Ontario, 7 May 1894.  His father was a prominent lawyer and president of the South Wellington Conservative Association.  Both his father and grandfather were active in the local militia.  His family raised him in daily contact with the law, politics and the military.

After attending public school and the Guelph Collegiate Institute, it seemed natural that he would attend Upper Canada College and enroll in the militia.  Having joined the 16th Field Battery in 1909, at age 15, he rushed to join the Canadian Expeditionary Force at the outbreak of war in 1914.  A courageous, efficient and dedicated Gunner officer, he quickly gained a reputation for excellence.

Early in 1916, while serving in Flanders, his left forearm was shattered by shrapnel, and in January the following year, he was invalided to Canada, spending nearly three years in hospital undergoing 13 bone graft operations.  He never regained the use of his left arm.  Continuing to serve in uniform, he assumed command of the 64th Field Battery and later, on its reorganization in 1920, of Guelph’s 16 Field Battery.  In 1929, he was appointed to command the 11th Field Artillery Brigade.

His devotion to duty, infectious enthusiasm and insistence on high standards earned the formation the Shaughnessy Cup in 1930, 1931 and 1932.  The cup was awarded annually for general efficiency.  Concurrent with his military activities, he attended the University of Toronto and Osgoode Hall.  He was called to the Bar of the Province of Ontario in 1920, practicing law in Guelph immediately after that.  He made his entry into local politics in 1921 and won a seat as alderman.  By 1925, he was Mayor of Guelph. At age 31, he was the youngest chief magistrate in Canada.

In 1926, he was appointed Assistant Master of the Supreme Court of Ontario, and three years later was elevated to Master-in-Chambers.  Once again, the youngest to hold this post in the province’s history.  This job involved the hearing of minor cases and the screening of cases for Supreme Court hearings.  In 1931, he was appointed Chairman of the Ontario Securities Commission for the administration of the Ontario Securities and Fraud Act.

By the late 1920s, his entry into Ontario provincial politics was underway.  In 1934, he began his political activities in earnest.  Within two years, he was serving as Chairman of the provincial Conservative Campaign Committee.  His initial efforts to win the party leadership were unfruitful, but the job was his by 1938.  The following year, in a by-election, he was elected to the Ontario Legislature, representing Simcoe East.  He led the Ontario Conservative Party in 1939.  In 1943 and 1945, he was re-elected as a member for High Park.  During his term as Premier, he demonstrated that he was a capable administrator and an able political tactician.  In an unusual move, he also retained the provincial education portfolio.

In early October 1948, he was chosen leader of the Progressive Conservative Party of Canada.  Two weeks later, he resigned as Premier of Ontario.  In December of that same year, he was elected to the House of Commons as the member for Carleton.  He spent the next eight years in the House of Commons, leading Her Majesty’s Loyal Opposition.  In 1953, he was appointed to the Privy Council, the first to gain such a distinction while in opposition.

Ill health followed several demanding parliamentary sessions, triggered his resignation as leader of the official opposition, in 1956.  Not willing to withdraw from public service entirely, he accepted the appointment as Canada’s High Commissioner to the United Kingdom, a position held until early 1964.

In 1949, he reaffirmed his link with the Gunner family by accepting the appointment of Honourary Colonel, in Guelph’s 11th Field Regiment, RCA.

During his career in public service, he also served as President of the Canadian Artillery Association, as President of the Toronto Branch the League of Nations and as Vice President of the Dominion Command Royal Canadian Legion.  He also earned full recognition as an author with his books, “Canada’s Fighting Airmen,” “The Truth About the Great War,” “Canada’s Part in the Great War,” “Tell Britain,” and “The Truth About War Debts.”  An article dealing with wartime profiteering in the munitions industry titled, “Salesmen of Death” has been translated into more than 30 languages.

A dedicated soldier and remarkable politician, he died on 4 January 1974, in Toronto and was buried in Guelph, Ontario. With service spanning both World Wars, he made a unique and lasting contribution to Canada and the Royal Regiment.