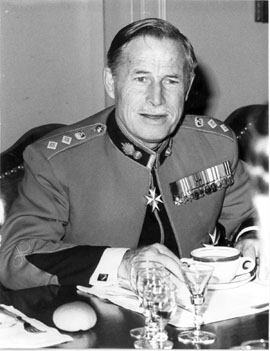 John Ross Matheson was born in Arundel, Quebec, on 14 November 1917.  He grew up as the only son and eldest of four children to parents Reverend Dr. Dawson and Gertrude Matheson of Quebec City.  He enlisted in May 1937, in 57th Field Battery RCA, Quebec City.  He served in this unit as Gunner, Bombardier and Sergeant until September 1939.  He received training by RMC and RCHA personnel.  He was commissioned on 6 June 1940, in 1st Field Brigade RCA.  He was posted to Camp Petawawa, then overseas to Camp Borden.  Once in England, he was assigned fire control duties on the south coast.

He is the only officer to have served during the war in all three Batteries of 1 RCHA.  Firstly, at the guns in B Bty in October 1941.  Then to 1st Div HQ as an Artillery Intelligence Staff Officer (IORA) in July 1942.  When he found his name posted to return to Staff College in Canada, he asked for a transfer. In February 1943, he returned to 1 RCHA.  The war had not been going well, and he wished to serve the Guns in battle.

Capt Matheson participated in the 1st Canadian Division’s landing during Operation HUSKY, the invasion of Sicily.  At that time, he was a FOO in A Battery, 1 RCHA, landing at Pachino beaches.  Matheson served as a FOO throughout the Sicilian Campaign and was one of the first FOOs to land on the Italian mainland at Reggio di Calabria.  He continued to control the fire of the guns of 1 RCHA in support of some of Canada’s most celebrated regiments, as they moved north along Italy’s Adriatic coast.  He worked with the R22eR, the PPCLI, the RCR, the 48th Highlanders, the West Nova Scotias, the Hastings and Prince Edwards and the Loyal Edmontons, the Seaforth Highlanders and the Carleton and Yorks.  He saw action with all of the nine battalions of the 1st Canadian Division and with units of the British Malta Brigade.  He experienced the vicious fighting of the Italian campaign.  While preparing to cross the Moro River and move into battle with the West Nova Scotias, an artillery shell wounded him.  They hospitalized him for several months in numerous British and Canadian facilities.  His next move was to embark on a legal and political career.

In four parliaments as MP for Leeds Riding, from 1961 to 1968, he chaired the then Standing committee on External Affairs, and served as Prime Minister L.B. Pearson’s Parliamentary Secretary, and as a member of the Special Defence Committee.  He was particularly interested in defence and intelligence. Canada sent him as an observer to the United Nations in 1961.  Then he went on several missions to Europe and Asia on behalf of the Prime Minister.  During this period, Prime Minister Pearson assigned him the task of being responsible for Canadian symbolism.  John Matheson worked very hard with others to develop both the Maple Leaf flag and the Order of Canada.

In 1972 in Ottawa, he rejoined the militia and serve in honorary capacities and to participate in many Conferences of defence Associations.  He was awarded the Canadian Forces Decoration in 1977 and was retired from the 30th Field Regiment of The Royal Regiment of Canadian Artillery in 1982, with the rank of Colonel.

He is perhaps best known for his contribution to Canada’s Flag and the development of the Order of Canada.  He died in 2013.