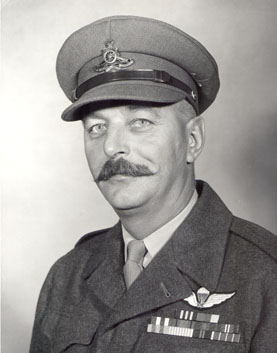 Leo Joseph Vallee was born in Carleton Place, Ontario, on 15 December 1923.  His father worked in a spinning mill and raised Leo and his younger brother after his wife’s death in 1928.  As a youth, Leo excelled in sport and outdoor activities.  He attended school in Carleton Place and Renfrew.

In February 1940, at age 16, he joined the Lanark and Renfrew Scottish Regiment and attended his first summer camp in Petawawa.  The following March, he enlisted in the Royal Canadian Artillery and trained at Peterborough and Petawawa.  The possibility of adventure, challenge and a broad general education appealed to young Gunner Vallee.

In July 1941, he embarked as a member of the 14th Field Regiment, RCA on the Empress of Canada, bound for Britain.  During the three years spent with his unit preparing to invade France, he mastered the duties of a driver, gun number, signaller, and technical assistant, as the unit learned to use its self-propelled howitzers.

Gunner Vallee played his part in the historic assault.  After a month and a half in Normandy, he earned the Military Medal for “gallant and distinguished services in the field” by his actions in a gun position fire, which ignited charge bags and spread to a gun.

He served in North-West Europe as a bombardier, until the hostilities ended. He then volunteered for the Canadian Army Pacific Force.  On repatriation, he joined the 1st Canadian Field Artillery Battalion RCA, Petawawa, but never deployed to the theatre.

At the end of the Pacific war in August 1945, he was posted to the 71st Field Regiment RCA in Petawawa.  In September 1946, he married and joined the 1st Regiment, Royal Canadian Horse Artillery (1 RCHA) in Camp Shilo, Manitoba.

In early 1947, he attended the Unit Air Transportability Course at the Joint Air School, Rivers, Manitoba, beginning a long association with airborne forces. He went to B Light Battery (Para) 1 RCHA, as a Group III instructor in the spring of 1949, qualifying as a parachutist.

The following September he joined the 2nd Field Regiment, Royal Canadian Horse Artillery as it prepared for service in Korea. In October 1950, he was sent to Korea with its Advance Water Party. He returned to Fort Lewis in December 1950, to rejoin the Regiment as it trained.

After six months of training at Fort Lewis, his unit boarded the American ship, General Edwin D. Patrick, arriving on 4 May 1951 in Pusan, Korea. Now a Warrant Officer 2nd Class, he served in Korea until 27 December. He found himself, once again, at Shilo and the Gunner School.  He qualified as a Field Branch Artillery Instructor (Group IV) and went to 1st Light Battery (Para) as a Battery Sergeant Major.

In late 1957, as part of the normal three-year rotation of regiments to the 4th Canadian Infantry Brigade Group with the British Army of the Rhine, Sergeant-Major Vallee, now with the British Drill and Duties Course and a three-month attachment to the Royal Horse Artillery under his belt, joined the 1st Regiment to serve as Battery Sergeant-Major (BSM) of B Battery. After three years in Europe, he returned to Petawawa’s 4th Regiment, Royal Canadian Horse Artillery where he became BSM of L Battery. In September 1963, he became Regimental Sergeant-Major (RSM).  After three busy years, he again travelled West to join Manitoba District’s Instructional Staff, although he was soon attached to Canadian Forces Base Shilo.  In January 1968, he returned to Eastern Ontario for employment at Canadian Forces Headquarters, Ottawa.

In November 1968, he was RSM at 1st Regiment, Royal Canadian Horse Artillery in Germany. He played a key role in guiding the unit’s conversion from light towed to medium self-propelled guns.  His experience of 25 years and of service on similar equipment during World War II provided valuable insight into the employment of the 155mm M109.

In September 1971, he was appointed RSM for an unprecedented third time, this time with the Canadian Airborne Regiment.  He seemed to be everywhere, talking to soldiers, listening to their concerns, sharing risks and hardship, and setting an example. He accompanied the Regiment across Canada, into the Arctic, to the U.S. and Jamaica. He parachuted with the Regiment’s sub-units at every opportunity.

In late 1973, he left the Canadian Airborne Regiment and assumed the duties of Artillery Chief Warrant Officer with the Director of Artillery at National Defence Headquarters.

In 1974, Canada recognized his unique contribution to The Royal Regiment with the Officer of the Order of Military Merit award. He retired to pension on 30 December 1975, with 35 years of service, spanning two wars.

Not content to end his service, he worked from 1978 to 1983 as Officer in Charge of CFB Petawawa’s Corps of Commissionaires detachment.  His unwavering service to The Royal Regiment and concern for Canada’s soldiers remain a paragon for future generations.