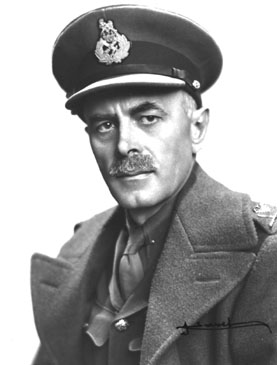 General A.G.L. McNaughton was born in Moosomin, Saskatchewan, on 25 February 1887.  He studied at McGill University.  In May 1909, the military commissioned him a Provisional Lieutenant.  He graduated with a Bachelor of Science degree at McGill University, in 1910.  That same year, he was appointed Lieutenant in the 3rd Montreal Battery, Canadian Field Artillery.

In 1911, he was promoted Captain and represented the Canadian Field Artillery in Britain.  On return to Canada he resumed his studies, gaining a Master of Science and Electrical Engineering degree.  He lectured at McGill in hydro-electrical subjects during 1912 – 1913, later entering private practice.  On 28 May 1913, he was promoted Major and appointed to command the 3rd Battery.

In September 1914, he was appointed to command the 4th Battery and embarked for England, arriving in France on 9 February 1915.  In April, he was wounded during the second battle of Ypres and invalided to England.  In October, he transferred to the 2nd Division Artillery, returning to the front in January 1916 with the 6th Howitzer Brigade.  He commanded the 21st Howitzer Battery, was promoted to Lieutenant-Colonel and given command of the 11th Brigade, Canadian Field Artillery.

In July 1916, he was seconded to the Canadian Corps Headquarters as Counter-Battery Officer.  He was awarded the Distinguished Service Order for devising innovative techniques, new equipment and the use of aircraft to locate enemy guns.  His near perfect barrage at Valenciennes, where he incorporated the use of smoke and accurate use of counter-fire while taking particular care to reduce collateral damage, remain a classic example of the gunners’ art.  He was credited with the invention of the “Box Barrage”, although he professed it to be more the result of evolution rather than invention.  For these and other actions he was thrice Mentioned-in-Dispatches and appointed Companion of the Order of the Bath.

During the final months of the war, at the battle of Soissons, he was again wounded.  On his return to Canada, he was appointed to the Permanent Force.

In 1919, he was a member of the Committee for Reorganization of the Militia, appointed Brevet Colonel and to the General List.  In 1923, he became Deputy Chief of the Defence Staff and was appointed District Officer Commanding Militia District 11, in 1928.

He was promoted Major-General and appointed Chief of the General Staff, on 1 January 1929.  He was seconded as President of the National Research Council.  At the outbreak of hostilities in 1939, he was appointed to the Canadian Army Special Force in the rank of Major-General and as General Officer Commanding 1st Canadian Division.

On 1 November 1944, he was placed on the Retired List and later that same month was sworn in as Minister of National Defence.  He was offered the Governor-Generalship but refused the honour believing he could, given the anticipated impending crisis over conscription, be more use to Canada as minister.  He remained in this portfolio until August 1948.

Among his long and exceptional listing of accomplishments in the service of his country as a citizen soldier, scientist and statesman are the development of the Cathode Ray Direction Finder, the co-development of the Vickers Vedette flying boat, the building of Trans-Canada Airways, the development of the discarding sabot round, the establishment of the National Aviation Museum, the establishment of unemployment relief camps and service as President of the United Nations Security Council.  He was keenly interested in conservation and was among the first to plead for the preservation of Canada’s energy resources.

General McNaughton was a remarkable Canadian whose legacy is felt by all citizens.  His entire life was one of service.  Men of his calibre are rare national treasures.  The Gunners of Canada are privileged to count him, “One of Ours.”