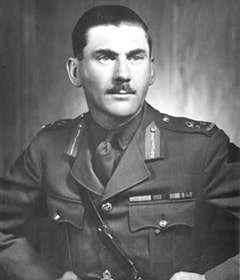 A third generation career officer, Guy Granville Simonds was born in Ixworth, Sussex, England in 1903.  He was brought to Vancouver at age 9 and subsequently attended Ashbury College in Ottawa.  At age 18, he was admitted to the Royal Military College in Kingston.  He soon gained a reputation for excellence, achieving a “Distinguished” grading in half his subjects.

On graduation in 1925, he was commissioned in the Royal Canadian Horse Artillery (RCHA).  After seven years as a regimental officer, he was selected to attend the Gunnery Staff Course in the United Kingdom.  On return to Canada, he was employed as an Instructor-in-Gunnery in the Royal Canadian School of Artillery (Mobile) until he was selected to attend the United Kingdom Staff College in Camberley, the first post-war RCA officer to do so.  His knowledge and abilities as an instructor gained him the post of Associate Professor of Artillery at RMC and later the post of Instructor in Tactics.  By 1939, his potential was clear.

In 1942, General Montgomery ordered all officers under his command to undergo a program of special courses. Brigadier Simonds advised Montgomery that Canadian officers had been taking courses for more than two years and their pressing need was more contact with their men. To everyone’s surprise, Montgomery said, “Of course. Quite right!”. This encounter marked the beginning of a strong, lasting friendship.

In the spring of 1943, he was appointed to command the 2nd Canadian Division and two weeks later promoted.  As Canada’s youngest Major-General, he assumed command of the 1st Canadian Division, preparing to fight in Sicily.  His campaign was swift and successful.  He took the division to Italy and later was recalled to Europe, promoted to Lieutenant-General and appointed to command the 2nd Canadian Corps, training in England for the invasion of Normandy.

Lieutenant-General Simonds conducted a series of successful campaigns.  The Walchern Island battle and the opening of the Scheldt to allied shipping were preludes to the Caen-Falaise battle.  Commanding 150,000 men of the 2nd Canadian Corps in 1944, he was ordered to close the northern half of the Falaise Gap – a possible route of escape for the retreating German armies.  His innovative, aggressive initiatives have become textbook examples of generalship.  At the end of 15 days, the enemy was in disorder.  Commander, General Dwight Eisenhower, pronounced the victory to be one of the three most decisive battles in Europe.

At the end of hostilities, Lieutenant-General Simonds commanded the Canadian Forces in the Netherlands and the Canadian Army Occupation Forces in North-West Germany.  Following a period of leave, he was appointed to the Imperial Defence College in Britain.  In 1949, he assumed command of the National Defence College and the Canadian Army Staff College.  After two years, he was appointed Chief of the General Staff, a position he held until his retirement to pension in 1956.

Lieutenant-General Simond’s many accomplishments were recognized by his Sovereign, the governments of France and Poland, and by Canada.  He was appointed Commander of the Order of the Bath, awarded the French Legion of Honour and Croix de Guerre, the Polish Order of Military Virtue and in 1970 made a Companion of the Order of Canada.  He was the epitome of a soldier: lithe, erect, immaculate and displaying self-discipline in all things.  His constantly appraising eyes and well-clipped mustache marked him as a professional army officer.

He was much in demand as a speaker in civilian life.  He objected to the destruction of historic buildings and lamented the country’s failure to develop secondary industries.

On leaving the army, he became president of Toronto Brick Company, and vice-president and director of Commercial Life and Halifax Insurance companies.  He was active in his community, serving as National Chairman of the Veteran’s Service Committee of the Red Cross, as a member of the Toronto Arts Foundation and as president of the National Ballet Guild.

Lieutenant-General Simonds died on 15 May 1974, in Toronto, buried with full military honours.