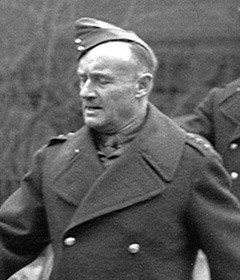 Conn Smythe was born, raised and educated in Toronto.  Although small in stature, he excelled in sport, particularly hockey.  His aggressive, determined play and hard work combined to make him a formidable opponent.  He was elected captain of the 1914-1915 Varsity Juniors.

When war broke out in Europe, Conn, then nineteen, tried to enlist in the Princess Patricia’s Canadian Light Infantry.  Mistaking his diminutive size for youth he was gruffly advised, “no children allowed in this battalion!”  He subsequently joined the 25th Battery, Canadian Field Artillery.  Earning a commission in 1915, he was invited to join the 40th Battery, popularly known as “the Sportsman’s Battery.”

Part of the 3rd Canadian Division Artillery, his battery arrived in England in March 1916.  By mid-July, they occupied a gun position on the Ypres Salient, participating in a series of legendary battles, The Somme, Courcelette, Mont St. Eloi and Arras.  In this latter battle, artillery observers accompanied the infantry for the first time.  Young Lieutenant Smythe went ‘over the top’ with the Cape Breton Highlanders.  During this trench raid he earned the Military Cross.  The Canada Gazette citation read:

“For conspicuous gallantry and devotion to duty.
He organized some men and led them forward with great dash,
thereby dispersing an enemy party at a critical time.
He himself accounted for three of the enemy with his revolver.
He has previously done fine work.”

After the Canadian triumph at Vimy Ridge, Lieutenant Smythe transferred to the Royal Flying Corps as an artillery observation pilot.  On 18 October 1918, he was shot down and wounded at Passchendaele.  He spent 14 months as a Prisoner of War, returning to Toronto in February 1919.

Although unable to compete due to his war injuries, hockey remained his passion and he soon found his niche as coach and manager of the Varsity Grads, winning the 1927 Allan Cup and representing Canada at the 1928 Olympics.  This success led him to the National Hockey League as coach of the fledgling New York Rangers.  After a brief tenure, he moved to the Toronto Pats, and by the end of 1927, owned the team.  He immediately renamed the team the Toronto Maple Leafs, adopting as team insignia the Maple Leaf cap badge of the Canadian Expeditionary Force.  In late 1931, amid the despair of the Great Depression, he opened Maple Leaf Gardens and won the Stanley Cup the following spring.

At age 44, war once again entered his life. By July 1940, he was a Captain in the Canadian Officer Training Corps.  Encouraging members of his organization to enlist, he soon had 25 of his employees in uniform.  Unable to get overseas, he recalled his First War experience and orchestrated a reincarnation of “the Sportsman’s Battery.”  In September 1941, the 30th Battery of the 7th Toronto Regiment was formed attracting athletes from many sports.  In the spring of 1942, while he was attending a Battery Commander’s Course in Petawawa, the Maple Leafs lost the first three games of the Stanley Cup final to Detroit.  In an unprecedented turnabout, they recovered and won the Cup taking the final four games!

After manning anti-aircraft defences on both Canadian coasts, his Battery sailed for England in October 1942.  Initially deployed to Colchester they soon moved south and later, near Dover to support the Normandy invasion.

Five weeks after D-Day, Conn led his battery into action.  They were soon tasked to support Operation “SPRING,” the 2nd Canadian Corps breakout from Normandy.  Assigned to protect the Orne bridges in Caen, the battery received intense bombing and shelling by the Luftwaffe.  With many vehicles damaged and burning, Major Smythe organized fire fighting parties and saved most of his vehicles.  The bombardment continued for two nights leaving four dead and 14 wounded, including Conn who received a severe shrapnel wound to his back and spine.

Evacuated to a Casualty Clearing Station, he spent the night in great agony, calling for help that only arrived the following morning.  He began to hear disquieting stories of seriously undermanned units, of untrained men and decimated units sent into battle as reinforcements.  While convalescing at the No. 1 Canadian Neurological Hospital, he compiled grim facts corroborating these stories.  When invalided to Canada, he found the Canadian public unaware of this serious state of affairs.  He informed The Globe and Mail and a scathing editorial appeared.  Reaction was immediate.  The Defence Minister visited Normandy and confirmed the shortage of trained reinforcements.  This sad episode ended Conn’s military career.

After recovering he returned to hockey, his team winning the Stanley Cup in 1945, 1949 and 1951.  His wound left him with a marked disability, inspiring him to aid the less fortunate.  He immersed himself in philanthropic activities, working for the Ontario Society for Crippled Children, the annual Easter Seal Campaigns, Scarborough’s Variety Village, the Crippled Children’s Centre and the Ontario Community Centre for the Deaf.

Conn Smythe’s contributions to Canada, his community and to sports were recognized in 1980 with his appointment to the Order of Canada.  Major Conn Smythe, businessman, soldier and sportsman, a builder of the Canadian nation and valued member of The Royal Regiment, died in his sleep on 18 November 1980.