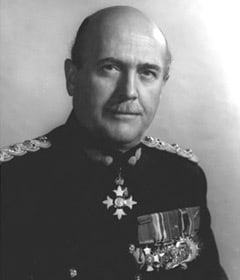 Major-General Albert Bruce Matthews, the son of Ontario’s 16th Lieutenant-Governor, was educated at Upper Canada College and the University of Geneva; on graduation he became a partner in the family business. Enrolling in the 3rd Field Brigade (Non-Permanent Active Militia) in 1928, he spent the next decade on regimental duty. While serving as adjutant of the 7th (Toronto) Regiment, RCA in 1938, he was promoted to Major.

At the outbreak of the Second World War Major Matthews mobilized the 15th Field Battery and accompanied it overseas in January 1940. While in the United Kingdom he commanded 3/23 Medium Battery, served as second-in-command of the 1st Medium Regiment and later mobilized and commanded the 5th Medium Regiment. After 14 years of continuous regimental duty he was a skilled practitioner of the Gunner’s art. He was appointed 1st Canadian Corps Counter-Battery Officer and in January 1943, was promoted Brigadier to command the artillery of the 1st Canadian Division. In this capacity he served in both Sicily and Italy. As the fire support commander during the Sicily landings, he controlled the minute to minute firing from the bridge of the monitor, Roberts.

In March 1944, he was appointed Commander Corps Royal Artillery 2nd Canadian Corps. The following November he was promoted Major-General and assumed command of the 2nd Canadian Infantry Division, a post he held until demobilization in November 1945. To recognize his fine work he was appointed Commander of the Order of the British Empire, awarded the Distinguished Service Order and twice Mentioned-in-Dispatches.

A grateful Dutch government appointed him Grand Officer of the Order of Orange Nassau with Crossed Swords, and France honoured him with both the Legion of Honour and Croix de Guerre with Palm. In November 1945 he was placed on the Reserve of Active Officer’s List.

Returning to the world of business, his confident, straightforward and efficient manner, resulting in part from his military service, were an immediate asset. He was chairman and president of Canada Permanent Mortgage Corporation, president of Canada Permanent Trust and chairman of the board of Excelsior Life Insurance Company as well as holding senior positions in more than a dozen other major national companies.

Major-General Matthews was called out on three occasions for Special Duty with the Supplementary Reserve and at various times served as Honourary Colonel of the 29th Field Regiment, the 32nd Field Regiment (Self Propelled), the 42nd Medium Regiment and the 1st Artillery Locating Regiment. From January 1964 until January 1965, he served as Colonel Commandant of The Royal Regiment of Canadian Artillery. He was a frequent visitor to Gunner units from coast to coast.

Major-General Matthews actively supported the arts and other philanthropic activities. He was a member of the Boards of Governors of Toronto Western Hospital and the Stratford Shakespearean Festival, a trustee of the United Community Fund and President of the Art Gallery of Toronto.

A leader in Canada’s war effort, in Canadian industry and in his community, Major-General Matthew’s achievements were legendary. He served his country and The Royal Regiment with distinction for more than 60 years. He died in Toronto on 14 September 1991.