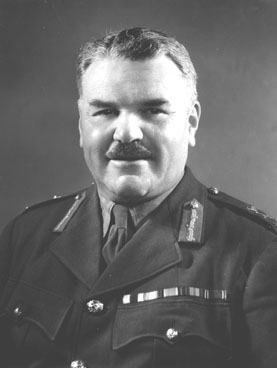 Major-General John Hamilton “Ham” Roberts was born in the South-Western Manitoba village, Pipestone, 21 December 1891.  He was educated at Epsom College in England, University School in Victoria, Toronto’s Upper Canada College and at the Royal Military College.  He excelled in sports, particularly football, tennis, shooting and cricket.  He graduated in 1914 and commissioned in the Royal Canadian Artillery.

Arriving in Flanders in the summer of 1915, he won the Military Cross at the Somme in 1916.  He served continuously with The Royal Canadian Horse Artillery (RCHA) until he was wounded in action, March 1918.  On release from hospital he was employed as an instructor until the armistice.

On return to Canada, he remained in the army and was soon training the gunners of the newly organized Permanent Force.  In 1924, he moved to Winnipeg to perform similar duties, later transferring to Halifax for duty with the heavy artillery.  He was promoted Major in 1929 and Lieutenant-Colonel at the outset of the Second World War.

He went overseas with the 1st Field Brigade of the 1st Canadian Division.  On arrival to England, this unit was reorganized as the 1st Field Regiment, RCHA.  When his regiment was ordered back to England on the final collapse of France, he was the only commander in the allied forces to withdraw with all his guns.  He also returned with 12 Bofors, seven predictors, three Bren gun carriers and a number of technical vehicles.

In August 1942, he was appointed military commander of Operation “JUBILEE”, the ill-fated Dieppe Raid.  The force was composed of large elements of two 2nd Canadian Division brigades.  He was the logical commander.  He conducted the entire operation from the bridge of a destroyer, while under heavy enemy fire and with grim resolve, he mounted the assault.  For conducting himself with “ability, courage and determination,” he was awarded the Distinguished Service Order.  France recognized his merit and gallantry, awarding him the cravat of Commander of the Legion of Honour and the Croix de Guerre with Palm.

In 1942, he commanded the Canadian Reinforcement Units in the United Kingdom.  He retired from the army in 1945, with 35 years of service.  After the war, he accepted a post with the Imperial War Graves Commission.  He fully retired in 1950.

A decorated and highly competent officer, he silently accepted the consequence of command on that fateful day in August 1942.  A humane and caring man, he served Canada, the Canadian Army and The Royal Regiment long and well.  Major-General Roberts died at his home in Jersey, The Channel Islands, on 17 December 1962.