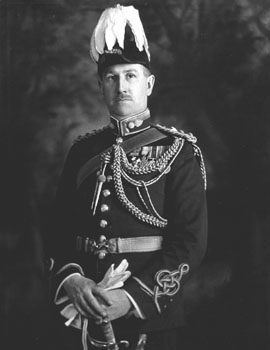 Major-General Elkins was born, 13 June 1883, at Sherbrooke, Quebec.  He graduated from the Royal Military College, Kingston, in June 1905, and joined the Royal Canadian Artillery.  His first posting was to “B” Battery, Royal Canadian Horse Artillery (RCHA).

In his early years, he served with “N” Battery, Royal Horse Artillery in India.  While on the sub-continent, he completed his Captain qualifying examination.  He returned to Canada in 1910, serving one year with each of “A” and “B” Batteries.  He gained a reputation for his skillful handling of his men and for his dedication to achieving high training standards.  During the winter of 1912, he served temporarily on the Artillery Staff in the office of the Chief of the General Staff, Ottawa.

He went overseas with the 1st Canadian Division.  After spending nine months in England, he took his guns to Flanders in July 1915, as part of the Royal Canadian Horse Artillery Brigade.  Following three months of relieving individual batteries of the Canadian Field Artillery in the line, the Brigade finally engaged the enemy as a formation, 23 November.  By Christmas of that year, he was appointed to command “A” Battery.  One year later, he assumed command of the Brigade.  Promotion to Lieutenant-Colonel was to follow in June 1917.

In December, he was evacuated due to illness and convalesced at the Prince of Wakes Hospital for Officers at Marylebone.  He returned to duty with the Brigade, in time for the German Offensive, in the Spring of 1918.  This major enemy action necessitated a significant regrouping of the available artillery.  In a remarkable display of tactical understanding and leadership, he controlled the movement and deployment of his own two batteries, as well as twelve additionally assigned batteries.  This feat included a withdrawal of more than fifty-six kilometres, in ten days, while under constant enemy pressure.  A command of this size was usually a job for a Brigadier with a sizeable staff.

On the morning of 10 October 1918, a Royal Field Artillery Battery, along with “I” and “N” Batteries, Royal Horse Artillery, were placed under his command.  In operation supporting an attack on the high ground north of Montay.  The Canadians advanced eight miles on a front of more than three miles, taking 400 prisoners and capturing a large number of enemy weapons.  This type of action was suited to the Canadian Horse Gunners and provided a gratifying final success for the Brigade.  This action earned him a Bar to his Distinguished Service Order.

A great civic welcome awaited him and his Brigade, in Kingston, 31 May 1919.  The city revelled in the achievements of “its” Brigade and welcomed them home as heroes.

Lieutenant-Colonel Elkins and his Brigade returned to their usual peacetime duties of training the militia.  He continued in command until 1922, when he was appointed Commandant Royal Canadian Garrison Artillery, Halifax.  Other successive appointments he held included Camp Commandant Petawawa, another short term as Commander of the RCHA Brigade, and Chairman of the Standing Arms Committee.  He was promoted Colonel, in 1925.  On his subsequent promotion to Brigadier, in 1930, he was appointed to command the Royal Military College, a post he held until 1935.

With service spanning both World Wars, Major-General Elkins greatly influenced the evolution of The Royal Regiment into a modern fighting arm.