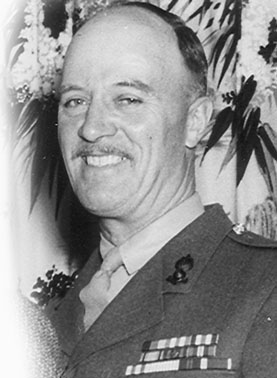 Frank Lewis Saunders was born in Gosport, Hants, England, on 28 November 1910.  Six years later, on the death of his father, arrangements were made to place both he and George, his younger brother, in a London orphanage.  At the last moment, an aunt and uncle took the boys in to join their own seven children.  It was a difficult, spartan life, but knowing no other, it was accepted readily.

Attending state-funded schools in England, young Frank completed the top class, Standard VII, and immediately was apprenticed to the shoemaking firm of Russell and Bromely.  He undertook additional jobs to augment his meager income, sometimes working as a laborer and lumberjack.

During the late 1920s the Anglican Church sponsored a program to promote immigration to Western Canada.  In return for passage, the immigrant would repay the fare by labouring on one of the cooperative farms.  Young Frank saw an opportunity to improve his lot and found himself working on a modest farm near Wauchope, Saskatchewan.  The work was hard but tolerable.  Here he was to develop a deep love for animals, particularly horses.

After working off his debt, he set off to satisfy his curiosity about his newly adopted country.  After saving for the train fare to Winnipeg, he went in search of work and adventure.  After several days in the city he happened to be on the streets of Winnipeg when C Battery of The Royal Canadian Horse Artillery (RCHA) paraded through the city.  The splendid horses, the jangling harness, the gleaming guns and the “smashing” uniforms lit a fire in young Frank Saunders.  On 29 May 1929, he enlisted in C Battery to begin a career and an association with The Royal Regiment that would last some 63 years.

He served at Fort Osborne Barracks in Winnipeg, until December 1939, when he sailed for England.  During the Second World War, he saw service in Sicily, Italy, France, Holland and Germany.  By war’s end, he had risen to Battery Sergeant-Major, three days after VE Day he returned home to Winnipeg.  With the raising of the Special Force in response to a United Nations request for Canadian assistance, he volunteered and served with the 1st Regiment Royal Canadian Horse Artillery in Korea, from April 1952 until May 1953.

He was promoted to Warrant Officer Class I on 20 June 1960.  He served three years as Regimental Sergeant Major of the Royal Canadian Artillery Depot.  In 1963, he was posted back to Winnipeg on Instructional Staff duties and two years later, on 18 July 1966, he retired to pension.

After a short period of leave, he joined the Royal Bank of Canada where he worked 10 years in the Winnipeg Computer Processing Centre.  He retired for a second time in September 1976.

A strong supporter of Canadian Gunner institutions, he served for 21 years as president of the Winnipeg RCHA Association.  He was a member of the Monarchist League of Canada and a member of Branch 100, the Royal Canadian Legion.  He was also active in the Masonic Lodge and was a frequent contributor to The Quadrant, one The Royal Regiment’s “in-house” journals.  His recollections, military vocabulary and unique way of looking at army life gave a special life and character to his stories of soldiering.

After a short illness, he died in Winnipeg, 14 January 1993.  He is buried in the military section of Brookside Cemetery.