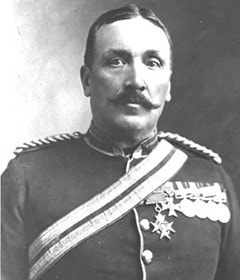 In 1849, Samuel Benfield Steele was born in Purbrook, Ontario, the son of a retired Royal Navy Captain.  Following family, military tradition, he enlisted in the Simcoe Militia during the Fenian Raids of 1866.  He preferred to serve in the ranks to gain experience.  As a private, he accompanied Wolseley on his expedition to the Red River.

Upon his return to Ontario, still interested in the military, he was one of the first to enlist in the first Canadian regular army unit, A Battery of the Royal Canadian Artillery.  An active and robust soldier, young Sam Steele was quick to master a measure of the gunner’s art and was soon promoted to sergeant.

In August 1873, they laid plans for the creation of the North-West Mounted Police.  Steele received a discharge from the Artillery and joined the NWMP.  He joined with Lieutenant-Colonel French, who was the first commissioner of the NWMP.  Steele was the third man to enlist.  He took part in the great western march of the North-West Mounted Police in 1874, travelling over 1,255 miles on horseback.

In April 1885, Superintendent Steele’s duties involved policing the area through which the Canadian Pacific Railway was being built, enforcing prohibition, and generally keeping order.  When the North-West Rebellion broke out, he organized a mounted force called “Steele’s Scouts.”  He commanded the cavalry that went in pursuit of Big Bear.

In 1887, he went to the Kootenays, where American miners clashed with the natives.  Here he established Fort Steele, now a historical park.  During the Klondike Gold Rush, Steele went north to police the mountain passes connecting the Alaskan seacoast and the Canadian goldfields.  His exploits in the Klondike are legendary.  Many authors have written stirring accounts of “Smooth Bore Steele,” a nickname referring to his gunner origin.

War broke out in South Africa in 1899.  Steele resigned from the North-West Mounted Police to become the founding commander of Lord Strathcona’s Horse in 1899.  After the war, he remained in South Africa to command the Transvaal Section of the South African Mounted Constabulary.

He returned to Canada in 1906 and joined the Permanent Force, commanding, in turn, the Calgary and Winnipeg Military Districts and rising to the rank of Major-General.  In 1914, he became Inspector General for Western Canada, responsible for the training of western troops for the Second Contingent of the Canadian Expeditionary Force.  He commanded the 2nd Canadian Division and accompanied it to England, although he did not go to the front.  He remained as commander of the Shorncliffe Area and, after the hostilities ceased, retired from the army in 1918.

Retirement did not sit well with Sam Steele.  Nearing seventy years of age, he died on 30 January 1919, in London, England, given a hero’s funeral.  With his death, the Canadian West would never again be the same, and other figures would pale by comparison.  His life and times loom large in Canadian history.

His early days with the Canadian Artillery contributed to what he was and what he became.  Through men like him, The Royal Regiment played a significant role in the opening of the Canadian West.  He was one of a kind.